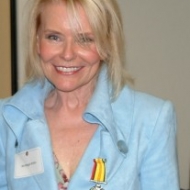 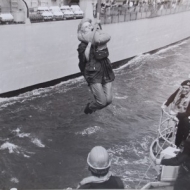 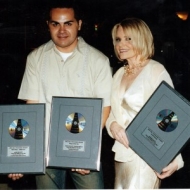 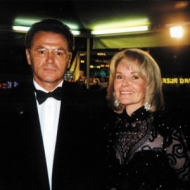 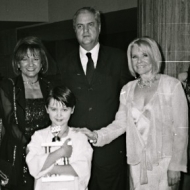 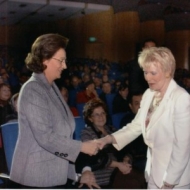 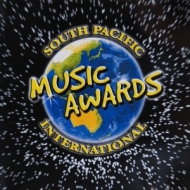 1. Recipient of a Certificate of Appreciation in 2005, given by His Excellency Major- General Michael Jeffery AC, CVO, MC Governor General of the Commonwealth of Australia  for her work coordinating the Thai/Burma Railway Expedition. (Refer to Events page for details)

2. Awarded the ‘Vietnam Logistics & Support Medal’ in 1988 for her tour of duty entertaining the troops at the time of the ‘Tet Offensive’ 1968 during the Vietnam War. (Add pic of medals here) Maggie is an ‘Honorary Lieutenant’ in the Australian Army.

The first entertainer invited to join the Vietnam Memorial Association 2004. The memorial is located at the Australian Defence Force training facility, Canungra, Queensland.

Maggie has raised many thousands of dollars for Legacy through her Gala concerts.

3. In 1981 the Royal Navy (RN), adopted Maggie Britton, the only other recipient of this rare honour being Dame Vera Lynn.  The adoption affords Maggie several interesting privileges. Permission to park in the forecourt of Admiralty House, London is one that is very useful and appreciated.  Invited to join manoeuvres with the fleet in the English Channel aboard HMS Arrow and transferring via breeches buoy under full steam to HMS Norfolk remains a treasured experience for Maggie.

4. Awarded ‘Best Album’ and ‘Producer of the Year’ for the album  ‘From The Desert To The Sea’ Maggie pictured here with the artist Jason Lee Scott.

The (MMF) has some five hundred members who in turn represent the majority of Australian recording artists. The objective of the organisation is to raise the professional standards of music management. The (MMF) undertakes representations to government and others on matters affecting members’ obligations, rights or interests.

Maggie is a ‘Full Writer Member’ of the Performing Rights Society (PRS). The criteria for full membership is five (5) commercial releases.

Member of the international judging panels:

8. The South Pacific International Music Awards ‘Gala Concert’ was a televised presentation hosted by Maggie Britton, broadcast in Australia on the NBN network and internationally in twelve (12) Countries.

Among Australian events adjudicated is the Queensland Recording Industry Association Annual Awards, judging the ‘Vocal Performance and Song of the year’ categories.

2000
From 1995 until 2000, Maggie was Co-Director of the South Pacific International Song Contest Pty Ltd. The company was responsible for staging the prestigious South Pacific International Music Awards, a pre-release awards event and hit predictor show casing the best young talent from the world’s music industry. Taking place annually and involving a variety of events presented over a five- day period.

Dignitaries including the Mayor of Gold Coast City attended the ‘Gala’ presentation as well as Ambassadors or Consuls of the countries represented, along with industry movers and shakers.

The ‘Media Launch and Welcome’ by the Gold Coast Tourism Bureau,

‘Meet the Stars’ presented in a cabaret setting was much enjoyed particularly by those members of the public who got the opportunity to meet in person and speak with stars from their country of origin.

‘Up Close and Personal’ a presentation of famous songwriters performing the hit songs they had written for big name recording artists,